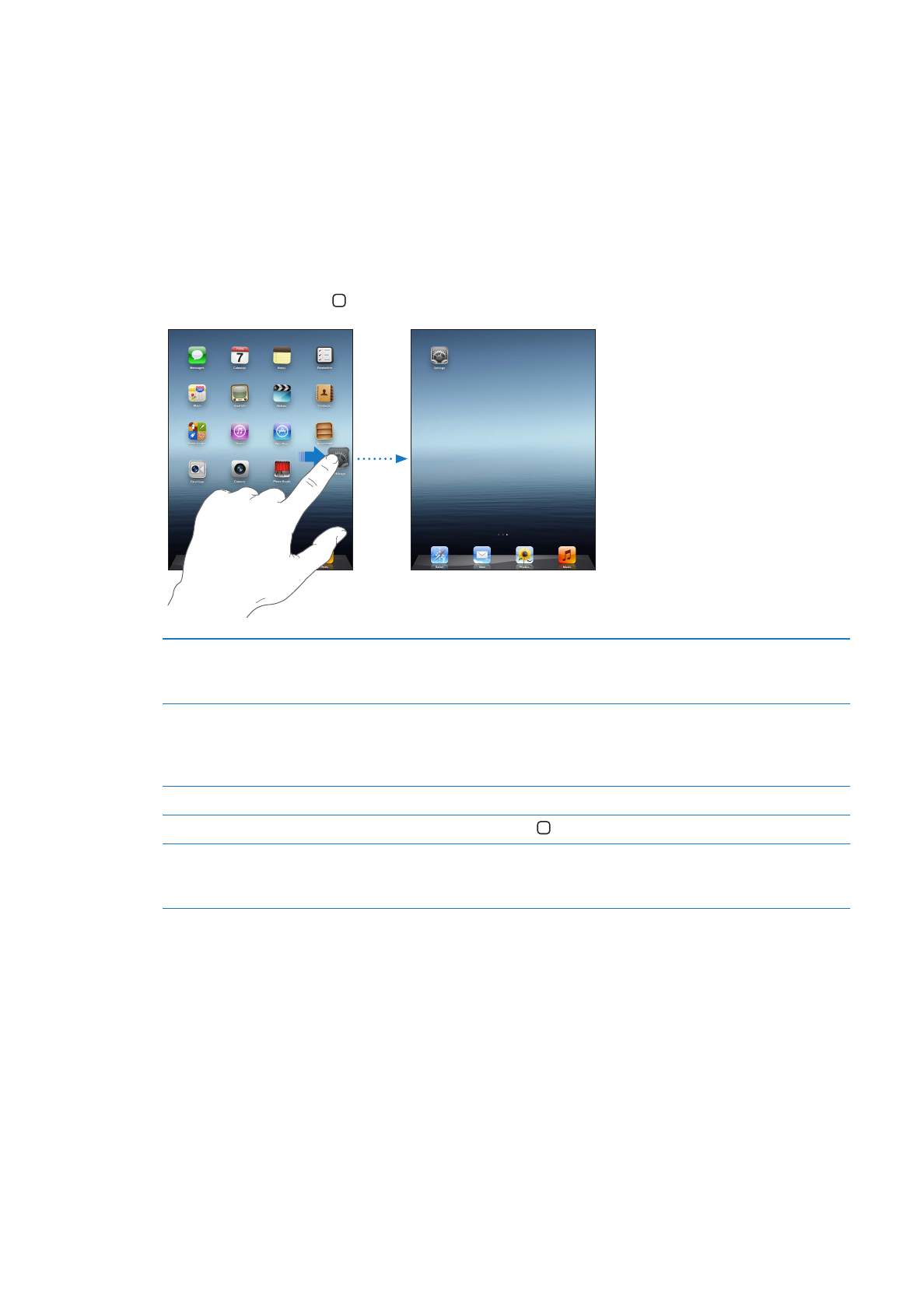 You can customize the layout of app icons on the Home screen—including the icons in the Dock
along the bottom of the screen.

Touch and hold any app on the Home screen until it jiggles.

Arrange the apps by dragging them.

Press the Home button to save your arrangement.

Move an icon to another screen

While arranging icons, drag an icon to the right edge of the screen until a
new screen appears. You can return to a previous screen and drag more
icons to the new screen.

While arranging icons, swipe to the rightmost Home screen, then drag an
icon to the right edge of the screen. You can create up to 11 Home screens.
The dots above the Dock show the number of screens you have, and which
screen you’re viewing.

Go to a different Home screen

Go to the first Home screen

Reset the Home screen to its
original layout

In Settings, go to General > Reset, then tap Reset Home Screen Layout.
Resetting the Home screen removes any folders you’ve created and applies
the default wallpaper to your Home screen.

When you connect iPad to your computer using the Dock Connector to USB Cable, you can
rearrange the icons on the Home screen, as well as the order of the screens, in iTunes. Select iPad
in the iTunes sidebar, then click the Apps tab. 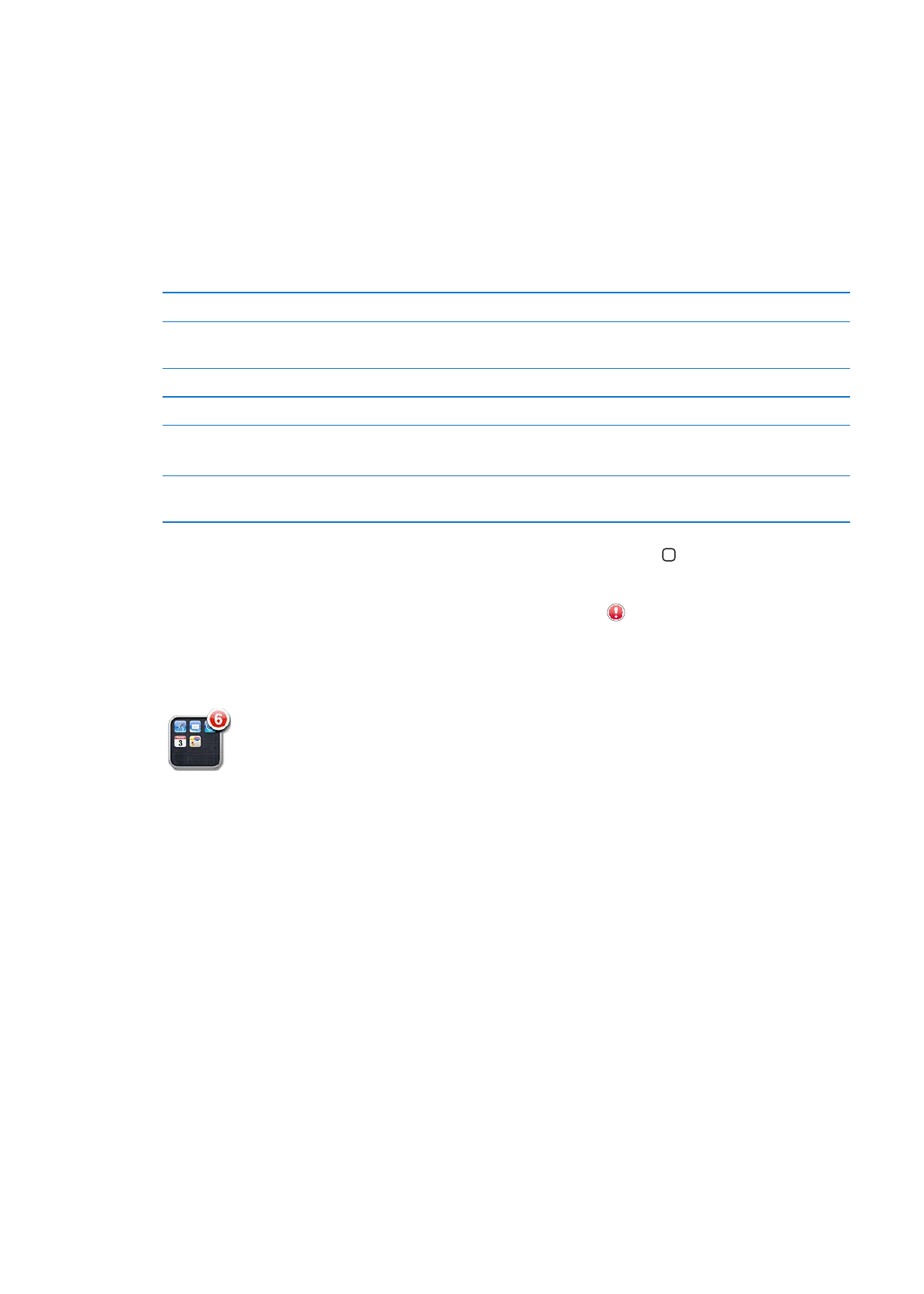 You can use folders to organize icons on the Home screen. You can put up to 20 icons in a folder.
iPad automatically names a folder when you create it, based on the icons you use to create the
folder, but you can change the name. Rearrange folders by dragging them on the Home screen or
by moving them to a new Home screen or to the Dock.
Create a folder: Touch and hold an icon until the Home screen icons begin to jiggle, then drag
the icon onto another icon.

iPad creates a new folder that includes the two icons, and shows the folder’s name. You can tap
the name field to enter a different name.

Add an icon to a folder

When the icons are jiggling, drag the icon onto the folder.

Remove an icon from a folder

While arranging icons, tap to open the folder, then drag the icon out of
the folder.

Tap the folder. You can then tap an app icon to open that app.

Tap outside the folder, or press the Home button.

Remove all icons from the folder.
The folder is deleted automatically when empty.

While arranging icons, tap to open the folder, then tap the name at the top
and use the keyboard to enter a new name.

When you finish organizing your Home screen, press the Home button to save your changes.

Many apps, such as Mail and the App Store, display an alert badge on their Home screen icon with
a number (to indicate incoming items) or an exclamation mark (to indicate a problem). If the
app is in a folder, the badge appears on the folder as well. A numbered badge shows the total
number of items you haven’t attended to, such as incoming mail messages and updated apps to
download. An alert badge indicates a problem with the app.

You can choose the images or photos you want to use as wallpaper for your Lock screen and your
Home screen. Choose an image that came with iPad, or a photo from your Camera Roll album or
another album on iPad.

In Settings, go to Brightness & Wallpaper, tap the image of the Lock and Home screens, then tap

Tap to choose an image or photo. If you choose a photo, drag or pinch it to position or resize it,

until it looks the way you want.